If you google “isopropyl alcohol-based wood stain,” it’s entirely possible you won’t find anything that resembles what you’re looking for. There’s probably a tutorial out there somewhere, but I haven’t found it yet. And although the bottle of concentrated tint that I use for staining with alcohol says, “May be be mixed with water or alcohol to create a wood stain,” I’ve been told that the manufacturer recommends using water as the base. 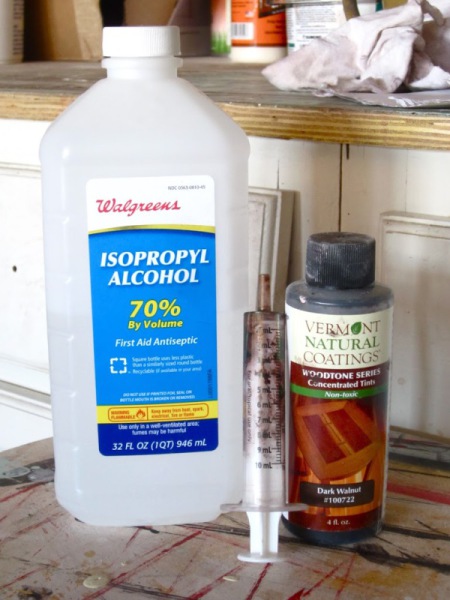 Alcohol is known for (among other qualities) its quick-evaporation which is why I thought it might work better than water. If you remember from my water-based stain tutorial, I don’t wipe off water-based stain like you’re supposed to (again, such a rebel). A quick-drying base seemed like it would work better for me since I leave the stain on.

I also thought using alcohol would probably reduce blotchiness (I can’t explain why I thought that…just a gut feeling and probably something to do with the stain drying quickly) and also thought it would limit the grain-raising of the wood, cutting out at least one step in the finishing process (no wetting the wood before hand and then sanding the raised grain back down before staining).

While isopropyl alcohol is not non-toxic, when using the 70% concentration with adequate ventilation I’ve noticed no harsh fumes. The final finish is not as perfect nor as easy to achieve as an oil-based finish, but the lack of fumes and easy cleanup totally has me sold. And probably, as the “woodworker,” I’m a much harsher critic of my work than anyone else. I doubt that most people (my clients included) would see the difference between my alcohol-based finish and an oil-based finish.

There’s a huge variety of woodworking dyes and tints available in a rainbow of colors (especially in specialty stores like Woodcraft) but the only ones I’ve worked with are from Vermont Natural Coatings. I’ve used their Early American tint and their Dark Walnut tint, both in a base of isopropyl alcohol, which I purchased at a drug store. The tints seem expensive at first glance (high price, small bottle) but they go a very, very long way. The alcohol, on the other hand, is super cheap, coming in at only a couple of bucks per pint.

So, here’s how I do it. You know I’m all about trial and error and so if you try this, I hope you’ll embrace your artistic side and experiment with scraps before you finish an actual piece of furniture.

I start with a measured amount of isopropyl alcohol in a jar that has a top. For this table, I started with one pint of alcohol. To it, I started by adding 10ml of concentrated tint. I put the top on the jar, shook it, and tested the tint on a scrap of wood from the table. I could tell immediately that I would need more tint, as the color was not dark enough and had sort of a purple hue to it. So, I added another 10ml of tint and tried again. I was keeping track of my ratios, so at this point I was up to 20ml to a pint of tint. Dark Walnut is meant to be a dark color (obviously) and getting the depth I needed was important. A color like Early American, on the other hand, is meant to be much lighter and for me it is easier to work with.

I used this 20ml to one pint ratio to stain the underside of the table so that I could be sure I was happy with the color. As it turns out, I ended up needing an additional coat to make the color work at this ratio. As much as I’d like staining to be a one-coat process, using an additional coat actually gives me some wiggle room in finishing. If the stain is a little too concentrated in one spot or a little bare in another, the second coat evens it out. It also gives me the opportunity to lightly sand a spot that might have come out too dark.

For stain application, I used a foam brush to apply a generous amount of stain (not so much that it drips or puddles, but close) following the grain of the wood and starting and ending my strokes at the wood joints. Since I know I can’t go back and wipe off the stain, laying down the stain on the wood has to be done carefully and with some precision. (This is where oil-based stain has a clear advantage — it’s much more difficult to mess up than working with water or alcohol.)

On this table, the aprons needed three coats of stain while the rest of the table was fine with just two. The aprons were different species of wood and absorbed the stain differently.

For the sealer on this table, I used the new Heirloom Wipe-On PolyWhey. When you’re using poly (any kind of poly) you have to lightly sand between coats in order to make the next coat adhere to the one before. Occasionally I’ll sand with too much gusto and take off some of the stain. In order to deal with those little bare spots, on this table I added a few drops of tint to my final two coats of poly, replacing the color that I accidentally sanded out. Using 400 grit sandpaper and a really light hand can keep this from happening, but when I’m working I almost always end up with a little bare spot somewhere, so this trick saved me a lot of frustration!

If you’re looking for a less-toxic, non-fumey stain that is easier to use than water-based stain, this might be your solution. Just keep track of how much tint you add to your alcohol so that it’s easy to replicate later!

{FINISHING} How to oxidize wood

Related Articles
We will be happy to see your thoughts

Friendly-Home is structured around a wide range of reviews and step-by-step guides touching on modern-day indoor gardening. Feel free to contact us regarding any content suggestions you may have.